I came across the pattern of separating your components into Presentational and Container Components (also known as Smart and Dumb components) while playing around with React/React Native a couple of years ago. I have not seen the same level of adoption in the Angular world for this pattern, so I thought I’ll explore it a little bit here. Let’s start with a little background:

To create a simple example, I am going to use the final code from the Tour of Heroes tutorial as my starting point. I’ll focus on ‘HeroDetailComponent’ for this post. The initial template and the corresponding component typescript code is below: 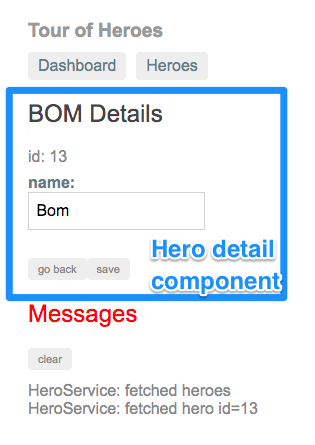 Let’s start with the Presentational component. We already have an @Input for the hero to bind to. Let’s add 2 @Outputs corresponding to the click of the “go back” and the “save” buttons, and emit events when those buttons are clicked. The code for the template and the component should look like:

Next we can create the Container component. The template will just interact with the Presentation component we defined above, and pass it the data it needs, as well as handle the events raised by it. In the component code, we can initialize the hero in the constructor, and add event handlers for saving the details, and going back to the previous screen. The code is below:

Container component templates have no logic in them to test. Therefore, we can bypass the whole Angular TestBed setup. Since Angular compiles components for every test case, we are skipping compilation, DI and component lifecycles. This results in simpler and faster unit tests. I have created some sample unit tests for our new container component.

The code shown in this post can be accessed here. Some of the advantages of taking this approach are:

I hope you found this useful. If you would like to explore the ideas expressed in this post further, Lars Gyrup Brink Nielsen wrote a bunch of articles where he takes this concept to the next level and implements the MVP pattern in Angular.