I’ve seen a few different solutions for implementing nested forms in Angular, and wanted to go over 3 of them in this post. I work mostly with Reactive Forms approach, and will be focusing on that. For the code example, I am taking the code sample from the Angular documentation on Reactive Forms as a starting point. The code builds a group of form controls, which allows a user to enter name and address and shows the form value and validity status. I’ve added 2 constraints: 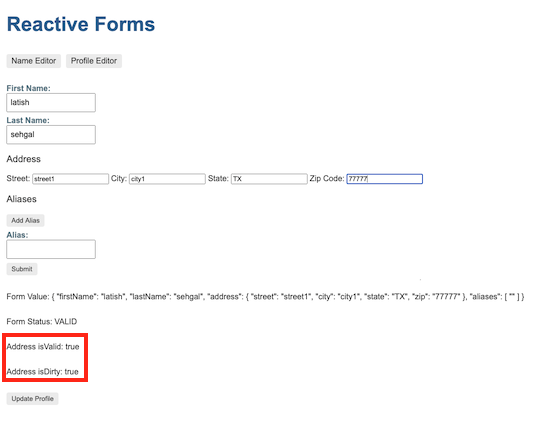 This is the most common approach that I’ve seen being used. We start by creating a new component for Address.

We move over the html and typescript code for rendering Address into its component. Since we need access to the root FormGroup, we pass it via an @Input. In the ngOnInit() method for the Address component, we can add the Address controls to the parent formgroup.

To read the dirty/valid status of the Address component in the parent control, we can try and get the child control via something like profileForm.get('address') and then read the corresponding properties. But this goes against the principle of encapsulation, as we’ll be relying on knowing the internal implementation of a Component. A better way would be to expose the needed properties on the Address component and accessing them from the parent, so I’ve added isValid and isDirty getter properties. You can review the code/demo below.

From the documentation on ControlContainer, it is:

A base class for directives that contain multiple registered instances of NgControl. Only used by the forms module.

This approach is similar to the previous one, but instead of passing the parent FormGroup via an @Input, we inject the ControlContainer class into the constructor of our Address component. This gives us access to the parent FormGroupDirective and lets us get to the corresponding control. Other than that, the solution is pretty similar to Approach 1 above, and you still have to create additional properties on the Address component to track the dirty/valid status.

To learn more about using this approach, you can watch Jennifer Wadella’s talk from ng-conf.

Defines an interface that acts as a bridge between the Angular forms API and a native element in the DOM.

Let’s look at each of these:

After implementing ControlValueAccessor interface methods, we need to register a NG_VALUE_ACCESSOR provider.

If you want to learn more about ControlValueAccessor, this post explains it in depth.

Now we still need to expose the validity status of the component. To do so, we need to implement the Validator interface, and then register it a NG_VALIDATORS provider, like we did for NG_VALUE_ACCESSOR. I learned about this approach from this post. Since our Address component is behaving like an Angular Forms Control, we can read the valid and dirty status in the parent html just like how we do it with Angular Forms (profileForm.get('address').valid and profileForm.get('address').dirty)

The final source code and demo is below:

We looked at 3 different alternatives for implementing Nested Forms in Angular in this post. They might all be good solutions, depending on your requirements, but it might not be a bad idea for you and your team to be on the same page regarding your available options, and preferred solutions, on a project.

The code for all the 3 approaches can be seen in the github repo. There’s a branch corresponding to each approach.